In the games that the Orchid Mantis appears in, it is a rare bug that the player can encounter, and can be found on white flowers. In Animal Crossing: New Horizons, it can be caught from spring to fall.

"I caught an orchid mantis! It hunts in flowers!"

"I caught an orchid mantis! I kid you not, man!"

"I caught an orchid mantis! My eyes see all!"

"I caught an orchid mantis! Our friendship is blooming!"

Like other insects in the Animal Crossing series, the Orchid Mantis can be donated to the museum in both games, followed by Blathers giving a description.

"Ah, the orchid mantis fools other insects by looking like a flower, eh wot? Bugs approach for nectar... CHOMP! The mantis attacks! It shan't fool me, though! Just look at it! Can't you see the antennae twitching? Blech! Duplicitous wretch!"

It can be found on the white flower above the entrance to the bug exhibit.

The Orchid Mantis in the museum in City Folk

Blathers, the curator of the museum, talks of his own experiences with an Orchid Mantis:

"The orchid mantis has the awful habit of disguising itself as a flower in order to avoid its enemies. ...I say 'awful' because of how revolting it is to touch a flower and feel the belly of a mantis! Oh, it was so soft and vile! Blech! The memories! I try to suppress them, but they always come flooding back!"

The Orchid Mantis is found on the central white pansy, amongst the butterflies, on the lower tier of the insect room.

Upon being donated, the Orchid Mantis can be found in the first room of the bug exhibit resting on white flowers placed right next to the entrance.

"Orchid mantises look like orchids and use them as camouflage for protection from predators. While this camouflage keeps them safe, it also helps them to surprise any prey that comes to the flowers. They are usually carnivorous, but they still eat the occasional banana to balance their vitamin intake."

"The orchid mantis is a bug whose brilliant colors and petal-shaped limbs give it the look of a flower. This masterful mimicry allows it to hide from predators in among the orchids. But oh this fraudulent flower! It lures other insects in to drink its nectar...And makes a meal of them instead! Imagine! To behold a beautiful bud...only to discover it's a bug instead! A repulsive revelation indeed!" 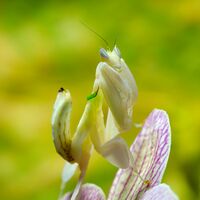 Hymenopus coronatus, the orchid mantis, on an orchid

Found in the rainforests of South-East Asian islands such as Malaysia and Indonesia, the orchid mantis (Hymenopus coronatus) is found primarily on orchids, a flower on which this species of mantis has evolved to replicate. Being primarily carnivorous, they eat most things that happen to pass by, their victims ignorant that they are even present, due to their camouflage. Prey includes lizards, bees, and butterflies. Orchid mantises have also been observed nibbling on bananas, likely to add vitamins to their diet.

As with other species of mantis, orchid mantises go into a frenzy when touched or lifted.