The Peacock Butterfly (カラスアゲハ, Karasuageha) is a rare insect, if only for its attraction to hybrid plants. It only hovers in areas near to purple, black or blue flowers. Villagers call them peacocks when asking for one or talking about them. Peacock Butterflies appear much less frequently in City Folk. Despite its rarity, its price is extremely low to the common insects Bells section.

Upon donating a Peacock Butterfly to the museum, Blathers will talk briefly about the insect:

"The peacock butterfly gets its name from its coloring, as one would expect. If you ask me, I think it's a bit too ostentatious... But that's just me..."

After submission, the peacock can be found fluttering around the flowers in first room of the insect exhibit. In the evenings, it can be seen resting peacefully on a purple pansy.

Blathers, the museum curator, will accept Peacock Butterflies for donation to the insect wing;

"I trust you've seen a bunch of butterflies fluttering about a puddle before, have you not...? Hoo, yes, those would be peacock butterflies, then. They don't just sip nectar... The beasts drink water, too. And in great, wretched groups, no less! Utterly repugnant!"

Peacock Butterflies appear with the rest of the butterflies in the flowerbeds on the lower terrace of the insect room after donation.

The Peacock Butterfly flying around in the Museum in Animal Crossing: New Leaf

Upon being donated, the butterfly can be found in the first room of the bug exhibit resting on flowers with the other butterflies. The exhibit has this to say about the Peacock Butterfly:

"The back of the wings of a peacock butterfly is black, while the front is blue or green. The males have black, velvet hair on their forewings and are easy to spot because of their beauty. Sometimes you may see a group of male peacock butterflies drinking water together."

In Wild World, City Folk, and New Leaf, players can access information about fish and insects in the menu. Regarding the Peacock Butterfly- 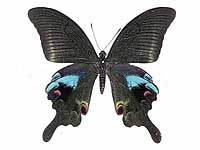 Papilio bianor, or Chinese peacock, is a species of butterfly that is native to East Asia. The female has more prominent markings than the male, and is roughly 7-8 centimeters long. Caterpillars feed on Zanthoxylum (Prickly-ash) and Phellodendron (Cork tree) plants.