The Rainbow Stag is a bug in the Animal Crossing series that first appears in Animal Crossing: Wild World. It is a rare beetle that can be found in the summer months, from 7 PM to 8 AM.

"I caught a rainbow stag! The seven colors are so bright, I better put on some shades!"

"I caught a rainbow stag! Someone tell me, already! Where's the rainbow?!"

"I caught a rainbow stag! Aren't you a colorful bug!"

"I caught a rainbow stag! Its rainbow armor is so shiny!"

"I do wonder why the rainbow stag beetle is colored the way it is... While I may not know THAT, I most certainly know THIS: They are foul."

"Rainbow stags have the honor of being called the world's most beautiful stag beetles, eh wot? Even the insect's belly has this rainbow design. making it one of the less vile bugs I've encountered. In fact, this may be the only insect whose underside I can view without retching..."

It can be found on a cedar tree to the left of the top terrace in the insect exhibit.

Upon donation to the museum, the Rainbow Stag can be found on a tree in the back of the upper right room of the Insect section. The exhibit has this to say about the Rainbow Stag:

"Rainbow stags are called the most beautiful of stag beetles because of their metallic-rainbow color. Not only are their wings a pretty rainbow color, but their bellies are as well. They are quite laid back, but they can be seen every now and then fighting to protect their territories."

When donated to the museum, the Rainbow Stag can be found on a tree, near the stinkbug and honeybee. When the player ask for facts about the Rainbow Stag, Blathers will say the following:

"Rainbows are beautiful things, I'm sure we all agree. But rainbow stag beetles? Bleech! Yes, yes, this beetle's back and belly shine with a pretty rainbow- colored luster. But that does not change the fact this bug has large pincers on its face and loves to pick a fight! If one can wish upon a rainbow, then I wish to stay far away from the rainbow stag. Perhaps I've picked the wrong profession." 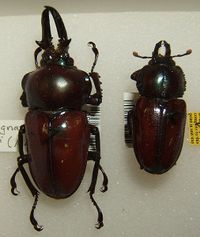 The rainbow stag beetle gets the name from its unique coloring, which appears to change color when looked at in different angles and in different light within its also unique, metallic looking body. It can be found in Queensland, Australia, climbing on trees. As mentioned in the "Bugs and Fish" window (also known as Encyclopedia), it is sturdier than it appears. It can lift up other stag beetles (such as other rainbow stags) and throw them during fights, using its mandibles (the horns sticking out from near the mouth).