In the games that the Agrias Butterfly appears in, it is a rare bug that the player can encounter, and can be found flying around flowers. In Animal Crossing: New Horizons, it can be caught from spring to the start of fall.

"I caught an agrias butterfly! It's so vibrant and lovely!"

"I caught an agrias butterfly! So bright and beautiful!"

"I caught an agrias butterfly! I guess this one agreed with me!"

"I caught an agrias butterfly! I wonder if it finds me disagrias-able?"

"The agrias butterfly is said to be quite an agile flier. I'm shocked you snared one! Yes, rather impressive! I know for a fact that I could never do it, wot! Or, to be more accurate, catching one would never even cross my mind...Fleeing from one...That I might do!"

"I must commend you for catching this particular type of butterfly! The agrias butterfly's atypical flight pattern has earned it the nickname "King of the Butterflies." It's such a swift flier that most enthusiasts who attempt to catch one rely on traps, eh wot? I daresay I'd lose a race with this flittering thing... Though I'd likely pass out from mortal revulsion first."

It can found flying in the bottom terrace by the entrance of the insect room, with other butterflies.

The Agrias Butterfly flying around in the Museum in Animal Crossing: New Leaf

Upon being donated, the butterfly can be found in the first room of the bug exhibit resting on flowers with the other butterflies. The exhibit has this to say about the Agrias Butterfly:

"Agrias butterflies are argued to have the most beautiful wings of all butterfly species. They're capable of flying quite fast, making them more difficult to catch than a number of their peers. Their wings sport three colors - red, blue, and black - but many have different patterns and shapes."

When asked about the bug, Blathers will say the following:

"Some say the agrias butterfly is one of the most beautiful butterflies in the world. Bah, I say! BAH! They may have brightly colored wings, but the way they flutter and flitter...SO FOUL! In fact, the agrias butterfly flies so fast, it is quite a feat to catch one. I suppose I should congratulate you on your good fortune... But catching any bug seems a misfortune to me."

The Agrias Butterfly can be found in the butterfly room, but may also be spotted flying around the big bug room as well. 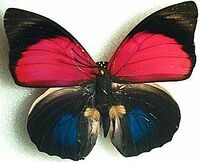 An Agrias butterfly from the real world

Agrias is a genus of nymphalid butterfly native to Central and South America. They are prized by collectors for their wings, which have iridescent coloration on the upperside and ornate patterns on the underside. Five species are known, but hundreds of different names have been given for specimens with different colorations.