In the games that the emperor butterfly appears in, it is a rare bug that the player can encounter, and can be found flying around flowers. In Animal Crossing: New Horizons, it can be caught from summer to the start of fall and from winter to the start of spring.

"I caught an emperor butterfly! It's blue... it's royal!"

"I caught an emperor butterfly! Such royal beauty!"

"I caught an emperor butterfly! Feeling blue, Your Majesty?"

"I caught an emperor butterfly! It's not your average monarch!"

As with all fish and bugs in the Animal Crossing series, the emperor butterfly can be donated to the museum by talking to Blathers, the curator. When donating, Blathers will say the following upon receiving the Emperor Butterfly:

"If you wish to keep an emperor butterfly as a specimen, remove the body. If you don't, oils from the expired body will leak out, changing the wing color. Blech, the very thought of those post-mortem oils..."

After donation, the emperor can be found fluttering around the flowers in the first room of the insect exhibit.

"The emperor butterfly's beautiful blue markings make it a popular gift in certain parts of the world. Hoo, yes, wonderful gift... Such gift givers should have their heads examined, I should think..."

It can be found in the bottom terrace, flying near or resting on the flowers with any other butterflies.

The emperor butterfly flying around the player in the museum in Animal Crossing: New Leaf

Upon being donated, the butterfly can be found in the first room of the bug exhibit resting on flowers with the other butterflies. The exhibit has this to say about the emperor butterfly:

"Emperor butterflies are easily recognized because of their lovely, iridescent blue wings. Pigmentation isn't actually what causes the color, but rather the reflections on their wing scales. Since their wings shimmer when moving, noticing them is much easier when they are midflight."

When the player donates an emperor butterfly, Blathers will say this about it before thanking the player for the donation:

"The emperor butterfly is called the jewel of the forest. But its vivid blue hue... Eww, let me tell you! The color does not come from a dye, but rather from light reflecting off translucent scales. Yes, butterfly wings are covered in tiny scales! SCALES! Butterflies? Bah! More like snakes of the sky!" 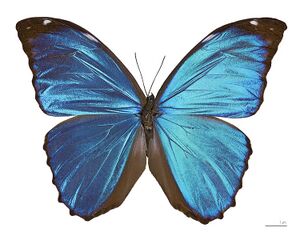 Morpho menelaus, more commonly known as the Blue Morpho, is an exotic butterfly that can be found in Central and South America. It feeds primarily on rotten fruit, but in the larval stage, frequently eats other larvae of the same species. The in-game name Emperor Butterfly, while not used to refer to its species, may originate from the species' family, Nymphalidae, which is sometimes known as the Emperors.

Morpho stems from the Greek word for form, and therefore means 'changed'. This may be a reflection of the species' iridescence, which has the quality of changing colors in the light. Menelaus was a legendary king of Sparta who married Helen of Troy.