The Tiger Butterfly[nb 1] is a bug in the Animal Crossing series that has appeared in every game to date. The "Tiger Butterfly" is called the "Eastern Tiger Swallowtail" in real life. It features yellow and black-striped patterns, with a blue band on the bottom.

In the games that the Tiger Butterfly appears in, it is a common bug that the player can encounter, and can be found flying. In Animal Crossing: New Horizons, it can be caught from spring to fall.

"I caught a tiger swallowtail butterfly! Those wings are beautiful!"

"I caught a tiger butterfly! The star of the butterflies!"

"I caught a tiger butterfly! Looks like I pounced first!"

"I caught a tiger butterfly! I've earned my stripes!" 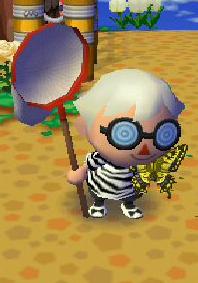 A player catches a tiger butterfly

"There's an old saying among some of my contemporaries: "Butterflies are beautiful, yet moths are monstrous." Well, if you were to ask me, I'd say they were all the same! By which I mean disgusting! Truly hoo-rrific, wot wot!"

"Tiger butterflies are named due to their distinctive tiger-like markings... I must say, I'd almost rather encounter a real tiger than one of these. Real tigers are nowhere near as... wretched."

The Tiger Butterfly can be found hovering around the flowers in the first room of the insect exhibit after donation.

"Aside from the south pole, one can find tiger butterflies just about anywhere on earth. Imagine these monstrous bugs flapping about the whole globe... The very thought robs me of sleep!"

The tiger butterfly can be found fluttering around the flowers on the lower tier of the insect room after donation.

The Tiger Butterfly flying around in the Museum in Animal Crossing: New Leaf

Upon being donated, the butterfly can be found in the first room of the bug exhibit resting on flowers with the other butterflies. The exhibit has this to say about the tiger butterfly:

"The larvae of tiger butterflies feed on leaves of orange trees until the metamorphose. When they're threatened, they emit a foul smell from their antennae to protect themselves. The dusting you see on your fingers whenever you touch their wings is actually from their scales. These scales form the wing pattern as well as repel rainwater, making them very important for survival."

"Tiger butterflies are known for their majestic wings, which many consider quite beautiful. Truth be told, I find them monstrous! Those strange striped patterns... They give this owl the goose bumps! And while you may imagine young tiger butterfly larvae to look like lovely green caterpillars...it's not so! Why, when tiger butterflies are but babes, they're covered in unsightly white, brown, and black spots. In this way, they camouflage themselves as...as...bird droppings! Putrid pests, indeed!"

The Tiger Butterfly can be found in the butterfly room, but may also be spotted flying around the big bug room as well. 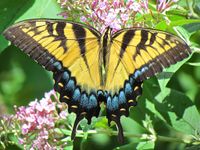 A tiger butterfly on a flower.