The app was originally a part of Nintendo's initiative to bring five mobile applications to market by March 2017 in cooperation with mobile developer DeNA[6] but faced a series of delays.

An Animal Crossing mobile game was announced on April 27, 2016, as part of Nintendo's earnings report for its full fiscal year ending March 31, 2016. Originally set for release in fall of 2016[7] alongside the then-untitled Fire Emblem Heroes,[8] the title went on to be delayed several times.

In order to give priority to its second mobile game, Super Mario Run, Nintendo announced in early September 2016 that the Animal Crossing mobile game would release sometime before March 2017, instead of during the fall 2016 time-frame.[9] The game was delayed a second time in late January 2017, with the announcement coming as part of Nintendo's earning report for the third quarter of its 2017 fiscal year. This time the game was pushed to the next fiscal year ending March 31, 2018.[10] However, in June 2017, Nintendo of America president Reggie Fils-Aime confirmed that the game would launch before the end of the year.[11]

The game was described in Nintendo's 2017 earnings report for the full fiscal year as a "pure game application" that would "have more prominent game elements"[12] than Miitomo, Nintendo's first smartphone application, which launched in March 2016. The report also noted that the application would be designed to "be connected with the world of Animal Crossing for dedicated gaming systems,"[12] suggesting that the application would offer some sort of cross-title connectivity with existing or yet to be released Animal Crossing titles. When Nintendo president Tatsumi Kimishima was asked why Animal Crossing was chosen as one of the first two Nintendo properties to make its debut on mobile, he stated that each property targets a distinct segment of Nintendo's audience, noting that the Animal Crossing series "has been played by a wide range of consumers including children and women."[13]

Animal Crossing: Pocket Camp first released in Australia on October 25, 2017, and it released in 40 additional markets[15] worldwide on November 22.[2] The game was released in Hong Kong, Taiwan, and Macau in July 2020 preceding a planned update to add traditional Chinese language support to the game on July 29.[citation needed] The game was released in South Korea on March 29, 2021,[3] after Korean language support was added to the game on March 26, 2021. Coinciding with the launch of version 5.0.0 on January 27, 2022, the game became available in 36 new markets. 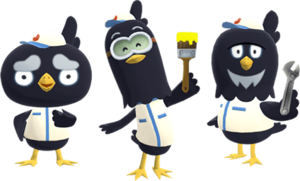 When the game was first made available, a total of forty villagers could camp at the player's campsite, the least amount of villagers in any game in the Animal Crossing series. However, more villagers have since been added through game updates. Many villagers who had appeared in every other game in the Animal Crossing series are absent. Additionally, whilst not villagers, special characters such as K.K. Slider, Tom Nook, Celeste, Brewster, Jingle, and Sable can camp at the player's campsite, and can be acquired by buying their signature piece of furniture via Leaf Tickets.

The game offers three paid membership plans of which the player can choose to purchase individually. The plans differ in both price and benefits.

There are a total of nine in-game locations that can be visited on the map, all serving different purposes. The player's camper travels with them to all locations they visit.

The campsite is the main area in Animal Crossing: Pocket Camp. The player can customise the Campsite with furniture and amenities. A total of eight villagers can stay at the Campsite at any one time, and the player can freely choose which villagers they want to stay at the campsite once they have accepted the invitation. The garden can also be accessed on the left side of the screen. It contains two patches of soil with 10 flower spaces in each.

The Market Place is an in-game shopping area ran by Isabelle, Timmy and Tommy, the Able Sisters, Kicks, and Reese. Furniture and clothing can be bought and sold here, among other things. The 1.4.0 update introduced Fortune Cookies that could be purchased from the Fortune Cookie cart that Timmy and Tommy operate alongside their furniture shop. This Cart can also be accessed directly from the map.

Breezy Hollow is one of the four locations where collectible items can be found to trade to villagers in exchange for craft materials. Apples, cherries, peaches, oranges, and pears can be found growing here, along with either lychees, lemons, or grapes.

Shovelstrike Quarry is run by Lloid, and can only be accessed by receiving help from friends or paying twenty Leaf Tickets. The player can smash rocks to obtain minerals, which are then given to Lloid for Bells, crafting materials or Gyroidites.

The cabin is a location that was introduced in the 2.0.0 update on November 28, 2018, and is unlocked once the player reaches Level 15. Like the Campsite, the player can decorate the Cabin with furniture and clothing, as well as wallpaper and flooring, and can invite up to 8 villagers to reside at the Cabin. In a newer update, the cabin has a second floor, which unlocks at Level 50.

The Happy Homeroom is a location introduced in version 2.2.0 where the player takes classes to design a room for a character.

Players can select Blathers's Treasure Trek by tapping the icon of Blathers on the map. This then brings up a menu allowing selection of a "map" for the player to explore. These maps can be acquired through multiple means including challenges and Gulliver's Ship. The player must take part in a mini game to win the reward at the end of the trek, but must pay a fee to progress. This fee can be Bells, resources or essences.

Available once further into the game, Pete's Parcel Service allows players to deliver requested items to animals so they do not have to deliver them themselves. Pete will only deliver items to animals the player has met before, with the game advising the player to "go and introduce yourself" before using the service.

Whilst this amenity may be accessed from the map, it may also be accessed by meeting Gulliver beside his ship on Sunburst Island. The player is presented with three islands that refresh every other day. Items must be shipped to the islands to fulfill their individual export quota. Exported items are given a value of 1-1,200 depending on their rarity and individual island preferences, and points required to Begin the Voyage also varies with each island but are usually 150 points but up to 1,200 points for three special islands with a golden HH voucher, 2 lotsa leaf tickets maps, and a leaf tickets map each.

Once the ship is loaded up, players choose to send the ship off which returns after a set time with souvenirs on board. Once all souvenirs have been collected—this often takes multiple trips—the island is marked as completed.

All app updates are installed from the App Store or Google Play, with new in-game assets then being downloaded from within the game itself.

Players can receive rewards if they have both Animal Crossing: Pocket Camp and Animal Crossing: New Horizons linked on the same Nintendo Account. The rewards can be redeemed using the My Nintendo screen. Doing so will add 50 Leaf Tickets to the player's account and show a 16-digit download code for the Nintendo eShop in order to access special furniture and clothing items in New Horizons.