Clu Clu Land is a furniture item in every first-generation Animal Crossing game. It can be placed on the surface of tables and other similar furniture that have surfaces for items. The player can interact with this item to play Clu Clu Land.

3,000 Bells, Wisp, a treasure hunt, or trees when the player has good luck. In Doubutsu no Mori+, it could also be obtained from any villager after sending them a letter with a secret code that appeared on the game's official site in January 2002.[1] For the purpose of fêng shui, its color is red. This item is lucky, meaning it gives a 777-point Happy Room Academy bonus when placed in the player's house. 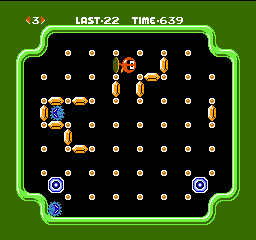 Clu Clu Land is a puzzle game published by Nintendo for the Nintendo Entertainment System in 1984. An expanded version known as Clu Clu Land: Welcome to New CluClu Land was released exclusively in Japan for the Famicom Disk System in 1992.

In Clu Clu Land, the player controls Bubbles, who must uncover all of the Golden Ingots in a maze while dodging enemies known as Unira.

Clu Clu Land on other wikis