"Spring is upon us! Flowers and warmer temperatures are a prelude to summer fun! It makes me want to fly a kite. Or a windsock. Be on the lookout for one!"
— Bulletin Board, Animal Crossing

During Children's Day in the Japanese version of Animal Crossing, Tortimer will appear near the shrine. If spoken to, he will give the player a Locomotive Model. In international versions, this item is instead obtained on Father's Day. Additionally, from April 20 to May 5, windsocks appear around the player's town. While the event itself does not occur in international versions, the windsocks remain.

The Carp Flag in City Folk.

Although Boy's Day does not appear in Animal Crossing: City Folk, a Carp Flag was distributed in Japan via WiiConnect24 in celebration of the event.

In Japanese towns in Animal Crossing: New Leaf, Isabelle appears in the plaza on Boy's Day and will give the player a Newsprint Helmet if spoken to. 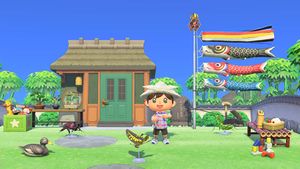 Although Children's Day does not appear in Animal Crossing: New Horizons as a standard event, it appears as a Nook Shopping seasonal event beginning in the 1.10.0 Free Update, for the first time being celebrated internationally. From April 28 to May 5, the player can purchase a Carp Banner and a Newsprint Helmet from Nook Shopping.

This page could be improved with the addition of images.
You can help by uploading one or more images and including them on this page.
Retrieved from "https://nookipedia.com/w/index.php?title=Boy%27s_Day&oldid=592561"
Categories:
Hidden categories: