From Nookipedia, the Animal Crossing wiki
(Redirected from Fireworks)
Jump to navigation Jump to search

The Fireworks Show (known as the Fireworks Festival prior to Wild World) is an event held regularly through summer in every game in the Animal Crossing series. During a Fireworks Show, fireworks can be seen flying into the sky in the background and exploding in different colors, lighting up the ground and the insides of certain buildings. Villagers will clap and sing as they observe the fireworks in the sky. On the day of a Fireworks Show the weather will always be clear, and unique music will play during the show.

In Doubutsu no Mori, a Fireworks Festival is held at the town's lake every Saturday evening throughout August. Redd operates a stall selling either Gyroids, airchecks, or fruit. What he sells changes each Fireworks Festival, and the prices vary based on which item he is selling: Gyroids cost 1,000 Bells, fruit costs 1,280 Bells, and songs cost 980 Bells. Villagers gather around the lake, and the fireworks can be seen reflected in the water throughout town. 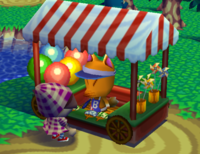 In Animal Crossing and Doubutsu no Mori e+, the Fireworks Festival is held at the town's lake on July 4, coinciding with Independence Day in the United States. According to a bulletin board posting advertising the event, the show is held to commemorate the anniversary of the Train Station opening. Villagers gather around the lake, and the fireworks can be seen reflected in the water throughout town. In the original Japanese release of Animal Crossing, Fireworks Festivals are instead held each Saturday in August.

Tortimer will be situated outside the Town Hall, and will give the player either a Sparkler or a Roman Candle which can be equipped to shoot out sparks. Tortimer will usually only allow the player to receive two of each item a night, but if they pester him long enough, he might give out more. Tortimer may also give the player a fortune for the night in the form of mail that goes directly into their mail inventory. 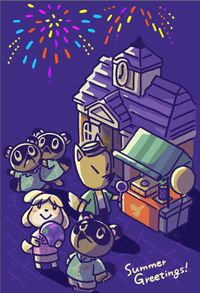 Artwork of the Fireworks Show in New Horizons

Redd operates a raffle stand in the event plaza, selling tickets during the show for 500 Bells. The player can win handheld items such as sparklers, balloons, a Pinwheel, a Tweeter, an Uchiwa Fan, or a Fountain Firework. If the player trips while running and holding their balloon, they will lose their balloon.