In Animal Crossing, the Lost & Found is in the police station. There can be up to twenty items in the Lost & Found; any subsequent items replace the oldest one. The following items from Tom Nook's store can appear naturally in the lost and found if they are in the town's common rarity group: furniture, wallpapers, carpets, clothing, umbrellas, and stationery. Additionally, Axes, Fishing Rods, Nets, and Shovels can appear in all towns.

The lost and found in Animal Crossing: Wild World 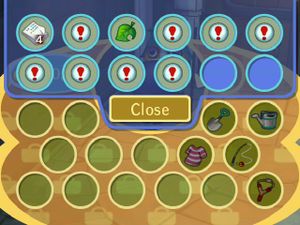 The lost and found in Animal Crossing: City Folk

A new item has a 50% chance to appear in each empty slot in the lost and found every day, up to a maximum of five items per day. If an item appears, there is a 20% chance of it being a Pitfall Seed, 10% chance of furniture, 10% chance of stationery, and 10% chance of a clothing top. The furniture, stationery, or top that may appear is affected by the town's rarity groups and the player's item fêng shui.

Upon town generation, three items—either furniture, stationery, or tops—will appear in the lost and found.