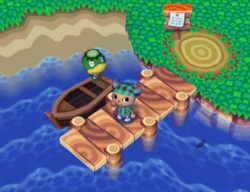 Kapp'n in his boat in Doubutsu no Mori e+

In Animal Crossing, the dock is located at the southern end of the town, on the sea. The dock is empty and has no purpose unless the player connects a GameCube – Game Boy Advance link cable to the console. This causes Kapp'n to appear at the dock on a small rowboat, where he offers the player with a free boat ride to Animal Island.

In Animal Crossing: New Leaf, two days after paying off the 39,800 Bell mortgage to Tom Nook, the player can access Tortimer Island by meeting Kapp'n at the town's dock, similar to Animal Crossing. Unlike the previous title, Kapp'n can transport up to four players from the dock at once, and he charges 1,000 Bells for the service. There is also a basket on the dock that allows the player to retrieve up to 40 items they have collected on the island. 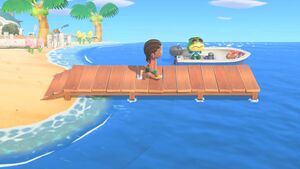 Kapp'n at the pier in Animal Crossing: New Horizons

In Animal Crossing: New Horizons, the pier appears on the west or east beach of the island, and four fish—the Blue Marlin, Giant Trevally, Mahi-Mahi, and Tuna—can only appear at it. The airport also counts as a pier, and these four fish can be caught next to it as a result.[citation needed] On a Mystery Island Tour, the dock counts as a pier.

Beginning in the 2.0 Free Update, once the player reaches a 3-star rating, Kapp'n will appear at the pier in his boat, and the player can speak to him to go on a boat tour for 1,000 Nook Miles. The player can only go on one boat tour a day.