"I caught a brook trout! I guess that little guy's just trOUT of luck!" 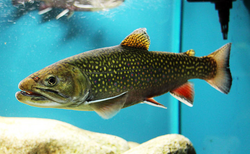 This fish lives in eastern North America, in lakes, rivers, and ponds at a high altitude. Some of these fish stray out to sea, but, unlike the salmon, they will not stray far from the river mouth. Despite being named a trout, it is genetically more closely related to the char. The brook trout has a dark green to brown color, with a distinctive marbled pattern of lighter shades across the flanks and back and extending at least to the dorsal fin, and often to the tail. A distinctive sprinkling of red dots, surrounded by blue halos, occurs along the flanks.