The moray eel is a sea fish in the Animal Crossing series introduced in Animal Crossing: City Folk. It can be found all day from late summer to mid fall.

"I caught a moray eel! When you're in love, that's a moray!"

Upon donation to the museum, Blathers says the following dialogue.

"The moray eel has a reputation as the gangster of the deeps, eh wot? But in actuality... It's quite the scaredy-pants and rarely strays from the home it makes between large rocks. If one doesn't start any trouble, one won't find any trouble. Such is the philosophy of the moray. It's rather universal, wot? The stronger one is, the more one understands the value of avoiding trouble..."

In the museum, this fish appears in the back tank, under a rock. It occasionally pokes its head out.

The information board in front of the tank that houses the moray eel says the following:

"Moray eels can often be seen sticking just their heads out from between two rocks. When unsuspecting prey approaches, they dart out to snatch it up into their sharp-toothed mouths. Once moray eels have their teeth in you, it's hard to get away, making moray-eel bites no trifling matter. Their long, finless bodies are covered in tough, snakelike skin that often gets used as leather."

"Despite its rather frightening features, the moray eel is really a very cowardly fish. It lives its life hiding in caves, and will only attack if you're looking for a fight. You've heard of a "bark that is worse than the bite"? Well, the moray eel has a face that's worse than its fight!"

The moray eel can be found in the shark tunnel exhibit in the museum.

During a Fishing Tourney, when given a moray eel, Chip will say the following dialogue.

"With moray eel, I like to bake it with pineapple and bacon. I just LOVE bacon! Nyuuuk nyuk nyuk nyuk!"

"Now, for your moray eels, grilling or tempura batter work well, but for a real treat, dry 'em overnight! Course, you know me! I don't have that kind of patience! YUM!" 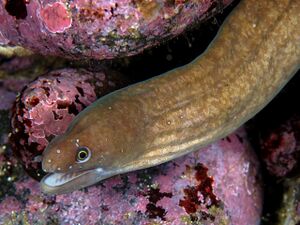 The Animal Crossing series moray can be found in shallow Pacific waters off the coast of Japan in reality. The approximately 200 species in 15 genera are almost exclusively marine, but several species are regularly seen in brackish water, and a few, for example the freshwater moray can sometimes be found in fresh water. The body is generally patterned. In some species, the inside of the mouth is also patterned. Their jaws are wide, framing a protruding snout. Most possess large teeth used to tear flesh or grasp slippery prey items.