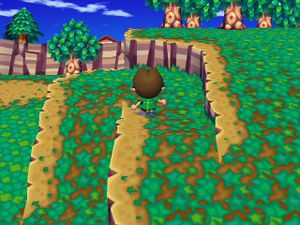 Grass deterioration (conjectural name[nb 1]), also known as animal tracks or desire lines, is an environmental feature in Animal Crossing: City Folk and Animal Crossing: New Leaf. By keeping track of players' movements throughout town, the game is able wear down the grass in high-traffic areas. While originally intended to add to the town's own unique character, the feature has led to desert-like conditions in extreme cases. Many players seek to prevent grass loss in their town, not only for aesthetic reasons, but because a lack of grass causes some bugs (e.g., Dung Beetle) or furniture (e.g., Snowman Series) to be nearly impossible to collect.

Grass deterioration in City Folk is much more noticeable than in New Leaf, so much so that patches of grass will shrink beneath a player's feet as they walk. The rate of regrowth is stable across seasons, however the rate of deterioration is more marked in the winter months. This became particularly evident shortly after the game's release in November 2008, leading players to petition the feature's removal[1]. Nintendo did not issue an official response, however customer service representatives assured players that the feature was intentional and suggested ways for players to encourage grass regrowth.[citation needed]

Each grass tile has a health value ranging from 0–255, with zero being dirt and 255 being completely healthy. The first time (per game load) that a player walks across a tile, the value decreases between 4-11 points, depending on the season. Each day at 6AM the game restores as many as nine grass points to each tile, the exact number depending on the flora inhabiting the space as well as the tile's proximity to other healthy (or unhealthy) tiles.


The first time a player steps on a grass tile (per game load) the game selects a value within the range appropriate for the current season and subtracts it from the tile's health value. A new round of wear can occur each time the town is loaded from memory. In addition to the initial game start, this occurs when partying over a Wi-Fi game, coming back from a friend's town, and by the start of the day message at 6AM.

Grass regrowth can be manipulated by the player to an extent. Certain flora will speed up regrowth, while others will have no effect. The effects noted in the table below are mitigated by a tile's proximity to other unhealthy tiles. If a tile is surrounded by healthy tiles, the effects will be maximized; otherwise the tile will grow more slowly. Grass health is adjusted for all tiles at 6 AM each day.


By providing five extra health points, flowers and trees can provide a total of up to nine health points per day. Note though that they only provide a growth bonus to the space they are occupying. Proximity to unhealthy spaces subtracts from the base growth rate, meaning that a grass tile with nothing on it would only gain three points of growth per day. As the minimum wear rate is -4, continually walking on a bare spot of grass makes it impossible for it to regrow.

Grass deterioration in New Leaf. Note the area of dirt around the tree. 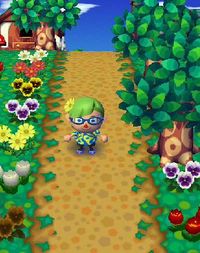 Short of spending the entire game inside the player's home, there is no way to avoid grass deterioration. Players can, however, take certain steps to limit it. In City Folk the player can reduce the number of times each day they load their game, as each play session allows for another round of wear. Players can also walk along pattern-designated paths. While patterns do not affect the wear rate, they provide a visual reminder for the player to limit their traffic to designated areas. Lining paths with flowers will keep the player on track and keep dirt patches from spreading past the path boundaries.