While initially absent from Animal Crossing: New Horizons, the snow crab was added in the 1.3.0 Free Summer Update.

"I got a snow crab! It's giving me the cold shoulder."

After the player donates a snow crab to the museum, it can be found in the large pool in the first room of the sea exhibit, along with the other crab species. The exhibit has this to say about the snow crab:

"Snow crabs live in the sea and are known mostly as a highly prized winter delicacy. When cooked, the typically dark-red shell turns to the beautiful bright-red color most commonly seen. They have a life span of 20 years and gradually grow bigger while periodically molting. If a leg is lost, it will grow back when molting occurs. The female is about half the size of the male."

After the player donates a snow crab to the museum, it can be found in the far right aquarium in the second room/dark room of the sea exhibition.

"The snow crab truly lives up to its name, wot wot. They are most often found in cold northern seas. Some have even been discovered living in the Arctic Ocean! Indeed, snow crab prefer to live in deep water that never gets more than three degrees above freezing. Hooooo. Just thinking about their icy environs is giving me the chills!"

During a Fishing Tourney, when given a snow crab, Chip will not score the sea creature but will say the following:

"Snow crabs! They're great whether boiled, grilled, or steamed. But I'm just gonna go ahead and swallow them whole! YUM!" 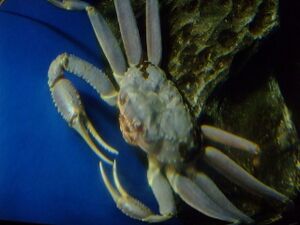 The snow crab is a crustacean native to shelf depths in the northwest Atlantic Ocean and north Pacific Ocean. They eat other invertebrates in the bottom of the sea, such as other crustaceans, bivalves (mollusks), and polychaetes (worms), as well as fish and, in times, themselves. They can grow up to 16.5 cm for males and 9.5 cm for females.