The football fish (チョウチンアンコウ, Chōchin'ankō) is an uncommon fish introduced in Animal Crossing: Wild World. It can be found between 4 PM and 9 AM between the months of November and March.

"I caught a football fish! Thanks to my fishing tackle!"

"I caught a football fish! Some countries call it a soccer fish!"

"This is rather graphic, but football fish males can get attached to females... Literally attached! And then the males get absorbed into the females! I heard this, and I thought how lucky I was to have been born an owl, eh wot?"

"...The most striking detail of the football fish's life is the way multiple males are cared for by one female. You heard me correctly! A single female football fish will nourish and raise multiple males by herself! In contrast to the females, males don't make nests or gather food. Their sole task is to cling to the female! ...Another tidbit: only the females possess that amazing, glowing antenna! ...Romance certainly takes many forms in the animal kingdom, eh wot?"

"Football fish live in parts of the ocean so deep that light does not reach them. Their lanterns, which they sway back and forth to lure prey, can emit light thanks to special bacteria. When prey gets near, they shoot a luminescent liquid and snatch the prey while it's blinded by the light. Only females possess the useful lantern. They can grow to be about two feet by maturity. Males are small, less than two inches in length."

"The football fish is a strange and grotesque deep-sea fish with a lantern-like light on its forehead. Its light is apparently powered by luminous bacteria and other glowing microorganisms. One theory says it can spray these luminescent sidekicks when prey approaches in order to dazzle them...The deep contains many mysteries...as well as some things that are just sort of odd and off-putting."

When donated, the football fish can be found in the north-eastern-most room of the fish exhibit, in the "deep sea" tank which is near the submersible and diving suit. It shares this tank with the Barreleye, Coelacanth, and Oarfish.

During a Fishing Tourney, when given a football fish, Chip will say the following dialogue.

"I'd say that football fish cooked in a sesame hot pot is as good as it gets! Nyuuuk nyuk nyuk nyuk!"

"Football fish are really great in a rich stew or just deep fried. Man, either way, they're delicious! Not that anything will keep me from just eating this guy raw! YUM!" 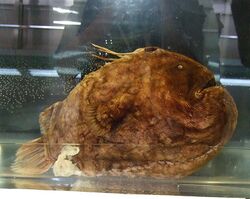 The Himantolophus or 'football fish' is a type of 'anglerfish' found in tropical and sub-tropical waters in the Atlantic, Indian and Pacific oceans. They live deep underwater. Both genders have a gelatinous flesh which thickens in the females, the bacteria on their body also gives them a "glowing" appearance. Females are a lot bigger than males and they also have an esca (which is the growth coming from their head) which they use as a lure to catch other fish. The males lose their digestive system as they grow older, so therefore need to find a female before they die. Once they have found a female, they undergo a peculiar mating ceremony, where the male bites and latches onto the female and deteriorates while it is still attached to the female, once the mating is complete. Hence, only adult female football fish are ever found. The males and females were once thought to be two different species.