"Blech! I caught a giant isopod! That's a horror if ever one existed!" —New Leaf 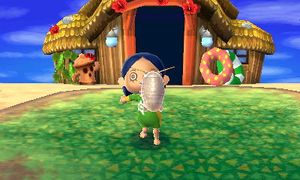 A player holding a giant isopod

After the Giant Isopod is donated to the museum, it can be found in the small tank in the middle in the first room of the sea exhibit.

"Giant isopods are related to the pill bugs, and they can grow up to 20 inches long. They are scary looking but still come across as humorous for some odd reason. Despite their roly-poly builds, they are surprisingly fast swimmers, making them rather agile. They have big appetites, gaining the title 'sea cleaners' mostly because they eat dead fish on the sea floor."