Difference between revisions of "Barred Knifejaw"

"I caught a barred knifejaw! I'm really cut up over how to turn that into a pun..." —Animal Crossing (GCN)

"I caught a barred knifejaw! With that jaw, it SHOULD be barred!" —Wild World

"I caught a barred knifejaw! I'll have to use it to cut veggies!" —New Leaf

The Barred Knifejaw (イシダイ, Ishidai) is a rare fish found in the ocean. This fish can be sold for 5,000 Bells at Tom Nook's store. It appears all day from March to November. A barred knifejaw has black and white stripes and, while in the water, has a shadow within the range of small and medium; the shadow resembles the squid, octopus, and the dab.

In New Leaf, it is used for the Barred Knifejaw Sauté recipe for the Harvest Festival. 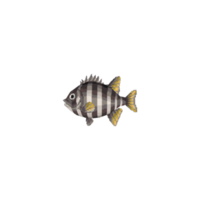 "I caught a barred knifejaw! Did you do something bad?"

I caught a barred knifejaw! Did you do something bad?March - November: All DayCurious and not easily startled, these fish have seven white stripes.OceanMediumAbout 24 inches (50 cm)5,0005,0001.0x1.0

"I caught a barred knifejaw! They must have a hard time eating!"

Donation to the museum

As with all fish caught in the Animal Crossing series, the barred knifejaw can be donated to the museum in each game by talking to Blathers, who will also give some information on it.

"Hoo! Indeed, WOO hoo! A barred knifejaw, I believe. Hoo! Hoo, I say! Just look at this magnificent creature! Truly, a king among edible aquatic beasts of the world! Tuna, scallops, oysters, lobsters, salmon, halibut, crabs, barnacles... Well, maybe not barnacles... One would have to be in dire straits indeed to consume a few of those jagged beasties!

"Now then, what say we set this chap up in his new home, eh wot?"

When the player donates this fish, Blathers will say this:

"<Player>, the very fact that you caught this tells me that you are quite a fisher! Oh, a recipe for Barred Knifejaw? I'd recommend putting it in a broth. Grilling makes the flesh rather tough, eh wot?"

When the player donates the barred knifejaw, Blathers will say this:

"Hootie hoo, look at you! You've hauled in a star catch this time! Indeed, simply marvelous work! The Barred Knifejaw is a clever fish that, it's said, requires some rather fancy fishing to catch. Their monotone color scheme certainly paints them as smart, sensible fish in my eyes, eh wot?"

An information board in the aquarium will display this description of the barred knifejaw after donation:

"Barred knifejaws stand out thanks to the seven stripes adorning their white bodies. Their natural curiosity and strong pull make them a popular target of anglers, but they're no easy catch. They have strong teeth that allow them to make short work of sea creatures with tough shells. This means that both urchins and mollusks need to be careful, lest they become meals for these fish."

"The barred knifejaw, also called the striped beakfish, is a lovely fish with a distinctive striped pattern. It is reportedly also a very curious fish in that it has been known to approach swimmers to "greet" them. They also tend to be good at avoiding fishing hooks, so well done on outwitting this one!

The striped beakfish, also known as the barred knifejaw, is a tropical fish, generally found in coral reefs and around Japan. It has been seen in Hawaii, but only once. It normally eats invertebrates.