This article is about the fish and sea creature. For the villager species, see Octopus (species).
Not to be confused with the Umbrella Octopus.

The Octopus (タコ, Tako) is a sea creature (fish prior to New Leaf and in Pocket Camp) in the Animal Crossing series introduced in Doubutsu no Mori e+.

While initially absent from Animal Crossing: New Horizons, the Octopus was added in the 1.3.0 Free Summer Update.

"I caught an octopus! You're mine, suckers!"

"I caught an octopus! Now its a shockedopus!"

"I got an octopus! Find out about it on my podcast!"

"I got an octopus! It can give four hugs at once!"

"I think Octopus, and I think fried octo-bits, eh wot? That said, I have to say my all-time favorite has to be octo-potpie. Hoo hoo!"

"Ah, yes, hoo, the octopus. Did you know the blood of the octopus is actually colored blue? With its eight legs and predilection for spewing ink...you'd think people would be repulsed by it. And yet, perhaps due to its fetching shape, the octopus remains one of the most loved sea creatures!"

The Octopus appears in the back tank, staying in the rock crevice towards the right. If the Octopus is placed in a home, it appears in a medium square tank with rocks so it can live in the crevice.

After being donated, the Octopus can be found hiding in a pot in the large pool in the first room of the sea exhibit. The exhibit has this to say about the Octopus:

"Many people think octopuses have eight legs, but those are not legs. Their tentacles are actually arms. They have a strange anatomy, with their head located between their body and arms. The flexible arms are perfect for catching all kinds of crab, shrimp, and shellfish, especially in reefs. When attacked by predators, octopuses emit a black ink that spreads through the water. This greatly reduces visibility and allows them to escape, making them highly skilled at disappearing."

"With its eight limbs, three hearts and surprisingly big brain, the octopus is quite the wonder! It is also an escape artist like no other! You see, the octopus has specialized skin cells that can change color and texture with lightning speed. Thus it can look for all the world like a patch of seabed one minute...and a pile of rocks the next! But the deception doesn't stop there, wot wot. When attacked by a predator, the octopus releases a cloud of ink and–POOF–makes its escape! Let's just call the octopus what it is, shall we? The ninja of the deep!"

The Octopus is found alongside with the Gazami Crab within the large aquarium that's located in the room in front of the main fish exhibit.

During a Fishing Tourney, when given a Octopus, Chip will say the following:

Although Chip will not score the sea creature, he will say the following:

"Best way to cook octopus? Boil it— no other way. Simple, huh? Well, you could just eat it raw like me. But be careful of those tricky tentacle suckers! YUM!" 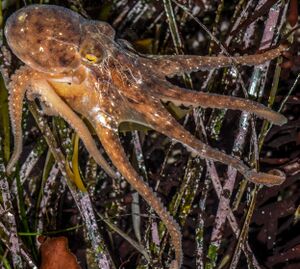 Octopus rubescens generally grows to a mantle length of 8–10 cm, and arm length of 30–40 cm. Adult weight is generally 100-150 grams, however occasionally animals up to 400 grams in weight have been observed. Like all octopuses, O. rubescens can change its color and texture, making its appearance highly variable. Color can vary from a deep brick red, to brown, to white, or mottled mixtures of the three. The octopus in the Animal Crossing series is the East Pacific Red Octopus.