A variant of the black bass, the platinum black bass, appears exclusively in Animal Crossing: Pocket Camp as an event fish.

"I caught a black bass! That couldn't BE more bass!"

"I caught a black bass! Turn up the bass!"

"I caught a black bass! I've got some class!"

"I caught a black bass! The most metal of all fish!"

As with all fish in the Animal Crossing series, the black bass can be donated to the museum by talking to Blathers, who will give some information on it.

When the player donates a black bass, Blathers will say this about it before thanking the player for their donation:

"In sport-fishing, the black bass is very often the main quarry... It's apparently a delicious fish, so I'd imagine some sport-cooking follows! Indeed, I suppose they would call that a catch-and-eat program! Hoo hoo!"

When the player donates a black bass, Blathers will say this about it before thanking the player for their donation dialogue.

"The black bass sports tremendous strength for its size, making it a popular catch in sportfishing. The bass is so popular that there are even fishermen who specialize exclusively in catching bass, eh wot? There are concerns about the effect of fishing on its habitat...but even so, this fish remains a favorite."

Once the fish is donated, Blathers writes the information on it on a corresponding board in the museum.

"They get their name from their somewhat blackish bodies, though they have a green tint. They usually hide in weeds and wait until other fish approach before forcefully striking. Many people use lures to catch black bass because they are such strong fish. Black bass have a fierce image, as the males will scare off other fish to protect the fry in the nest. They are related to sea bass, so they make for a tasty dinner, though their skin has a very strong odor."

"The black bass is a formidably strong fish and, as such is a common target for sport anglers. In some areas, there are even those who professionally catch just black bass! Yet in other areas where they are NOT native, they are considered an ecological nuisance. Invasive, even. One cannot help but wonder who is to blame for their invasion, hoo."

Once donated to the museum, the black bass can be found in the recessed tank in the first fish exhibit room with the Koi and Carp.

During a Fishing Tourney, when given a black bass, Chip will say the following dialogue.

"And just so you know, black bass is one fish you can't over-tartar-sauce! Nyuuuk nyuk nyuk nyuk!"

"Well, if you're curious, black bass is really great fried, but cook it up à la meunière sometime! Tasty stuff! For me, I'll just be eating this guy as is, if you get my drift. YUM!" 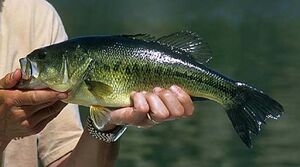 The black bass is native to the Southern United States and comes in three varieties, by frequency: the largemouth bass and smallmouth bass followed by the rarer spotted bass. It has become one of the most popular fish for fishing as a sport, especially in the US, but around the world, it has been stocked and have been noted to grow to be over 3 feet (1 meter) long. The average one can expect to catch is up to 5 pounds (2 kilograms).