"I caught a Ranchu Goldfish! But I prefer balsamicu goldfish!"

"The ranchu goldfish is a charming relative of the goldfish with a bumpy head and stout, round body. They have ordinary heads when born, but develop impressive rectangular heads after about three years. Supposedly their head shape changes depending on factors like the size of their tank... So ranchu goldfish enthusiasts aim to raise perfectly shaped specimens and work hard to achieve this. Of course, no one asks the ranchu goldfish themselves what shape they want their heads to be..."

The Ranchu Goldfish can be found in the tank immediately to the right of the entrance to the fish section of the museum sharing the tank with Guppy. 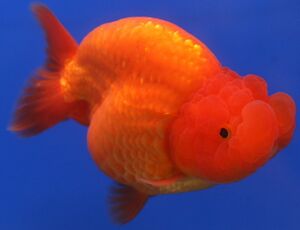 The Ranchu, (jap.: Katakana: ランチュウ; Kanji: 蘭鋳, 蘭虫 or 卵虫, literally "Dutch worm") is a hooded variety of fancy goldfish developed in Japan. It is referred to as the "king of goldfish" by the Japanese.

The modern-day ranchu is a Japanese development of the lionhead. They are the direct outcome of crossbreeding experiments of different Chinese lionhead specimens.