The yellow perch (イエローパーチ, Ierōpāchi) is a fish found in the river at any time of the day between October and March. Its shadow size is between small/medium, roughly the same size as the rainbow trout and Carp.

"I caught a yellow perch! Perch in my belly!"

"I caught a yellow perch! Why's the little guy so scared?"

"I caught a yellow perch! I wonder if birds usually stand on it!"

"I caught a yellow perch! Those yellow birds have to sit somewhere!"

The yellow perch can be donated to the museum by talking to Blathers, who will give a small speech about the donation:

"Most of the Perch family have perched on a dinner table at some time. Indeed, these fish are avalible for perch-ase all over the world, wot!"

"Yellow perch have spiny dorsal fins that make them look rather tough. Here's an interesting tidbit: as fry, these fish will hide amongst water plants by standing on their heads! It stands to reason that a tough fish like this one must be clever from the day it's born..."

The yellow perch appears in the middle-right tank of the aquarium.

The information board in the museum says the following:

"These fish are relatives of sea bass, though they're preyed on by other, larger fish, such as black bass. Their defining features are their large, prickly dorsal fins and gray stripes on pale-yellow bodies. Ice fishing on frozen lakes is a very popular way to catch them in their native United States and Canada. They are often fried before being eaten, which makes them a simple but tasty meal."

The yellow perch can be found in the larger of the tanks along the north wall of the freshwater fish room.

"The yellow perch is certainly worth squawking about. I find it a sight to behold! That jagged dorsal fin! Those brilliant stripes! Those glorious colors! Hoo, truly it is quite the specimen. I would be thrilled to witness it firsthand in its natural environment... But the yellow perch's peak season is winter, I'm afraid. So very afraid...of winter's biting chill..."

During a Fishing Tourney, when given a yellow perch, Chip will say the following dialogue. 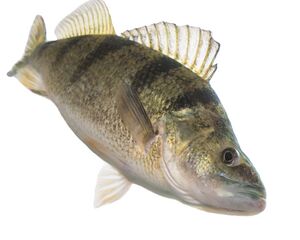 The yellow perch is a species of perch found in the United States and Canada, where it is often referred to as the shortform perch. Yellow perch resembles the European perch, but are paler and more yellowish, with less red in the fins. They have an active lifestyle during the day, when they feed. They have 6-8 dark vertical bars on their sides to protect themselves from predators. Yellow Perch are fairly easy to catch and are often caught while fishing for species in which they share the same body of water. As mentioned in the 'Bugs and Fish' window in City Folk, there are lures designed to look like perch, usually to catch bass but other fish are attracted to them too, such as Pike. Yellow perch weigh about 1.8 kg (4 lbs) and generally 10 to 38 cm (4 to 15 inches) long.