"I caught a hammerhead shark! Got any nails?" —Wild World

"I caught a hammerhead shark! I really nailed it!" —New Leaf

"I caught a hammerhead shark! I hit the nail on the head!" —New Horizons

The hammerhead shark (シュモクザメ, Shumokuzame) is the most common member of the shark group. This large fish always appears in the ocean during the summer months, between June and September. The hammerhead shark has always sold for 8,000 Bells, except in the PAL versions of Animal Crossing: Wild World, where it sells for 12,000 Bells, as much as the Hercules Beetle or the newer Golden Stag beetle. 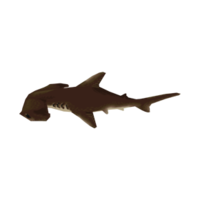 "I caught a hammerhead shark! Knew I just had to keep hammering away at it!"

I caught a hammerhead shark! Knew I just had to keep hammering away at it!June - September: All DayThese travel in schools, which is rare for sharks. Try to avoid running into one.OceanLargeAbout 100 inches (250 cm)8,0008,0002.0x2.0

"I caught a hammerhead shark! I hit the nail on the head!"

When donated to the Museum, this fish always goes into the back tank, the ocean tank.

Blathers will comment on the player's donation as follows:

"The fin of the hammerhead shark is used in some foreign cooking, eh wot? Indeed, it is used in a delightful delicacy called shark's-fin soup! This dish is usually quite pricey because of all that goes into its preparation. Why, it takes three days merely to reconstitute the dried shark's fin! After THAT, the chef must pick out the skin and cartilage with tweezers! Only after all that can it be used as an ingredient. THAT is a just cost!"

Blathers will say this when handed the big fish:

"Ah, the hammerhead shark, also, I believe, known simply as the hammerhead in certain circles. The hammer-shaped head is thought to give this shark a great sense of its environment...like radar. Compared to other sharks, this one wears a bit of a daft expression that some people find charming!"

The hammerhead can then be found "pacing" in the back tank, much like the blue marlin.

"The hammerhead shark is a shark with a head like a hammer, which is what you'd expect. However, despite being sharks, they are actually fairly laid back, which is not what you'd expect. With their eyes positioned on the two ends of their 'hammer,' they can see in almost all directions. Oddly, their nose holes are located right next to their eyes on their hammer section. They have a number of small holes on the front and lower portions of their heads as well. These holes allow them to detect prey, even fish hiding below them and out of sight. While they eat a nice array of fish, it seems rays are their favorite source of food. Rays, beware!" 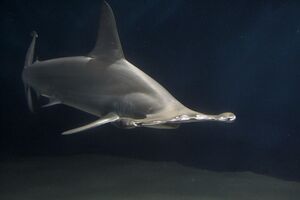 It's fins are valued for the delicasy shark fin soup.