The Cherry Salmon (ヤマメ, Yamame) is a common fish and a member of the salmon family. It can be found in the river between 4 AM to 9 AM and 4 PM to 9 PM from March to June, as well as 4 AM to 9 PM from September to November. Its shadow size is between small and medium, about the same size as the Crucian Carp (prior to Animal Crossing: City Folk) or the Dab (all games after Animal Crossing: Wild World). Its selling price is unusually high for a common fish.

"I caught a cherry salmon! It looks so PITiful! Get it? Pit? Oh, never mind."

"I caught a cherry salmon! Weird... it smells like fish."

"I caught a cherry salmon! This is definitely NOT the pits!"

"I caught a cherry salmon! Now for a cherry-salmon pie!"

"I caught a cherry salmon! It's the perfect topper for a marlin sundae!"

When the player donates a Cherry Salmon to the museum, Blathers will give the player some information on it.

When the player is donating it to the museum in Animal Crossing, Blathers will say the following:

"This is one of those fish that seem to mysteriously disappear from time to time. Drives fishermen batty, wot!"

When the player is donating it to the museum in Wild World, Blathers will say the following:

"Cherry salmon are known for their flavor and beauty, eh wot? Indeed, that is likely why they are called the queens of mountain-stream fishing. Hoo hoo! Of course, the males of the species might object to that moniker!"

When the player is donating it to the museum in City Folk, Blathers will say the following dialogue.

"The first thing you notice when looking at a cherry salmon is undoubtedly its green, polka-dot body, wot? All those different sized dots overlapping each other... How very chic!"

The Cherry Salmon appears in the center left tank.

"The spotted pattern on cherry salmon serves as a camouflage and is rather common in all salmon. Most cherry salmon spend their lives in rivers, but some do migrate to the ocean to fully mature. They are popular with anglers because of their well-balanced physique and beautiful patterns. Plus, their nervous nature makes them a good challenge to catch, which just adds to the fun."

"The cherry salmon is related to the salmon, and is known for its distinctive pattern of "polka dots." Their polka dots disappear as they mature, but ONLY in the fish of certain geographic regions. Pity the poor researchers that must make sense of the cherry salmon's fickle fashion sense."

Once donated to the museum, the Cherry Salmon can be found in the top waterfall tank with the Golden Trout and Char.

During a Fishing Tourney, when given a Cherry Salmon, Chip will say the following dialogue.

"I tell ya, I expected cherry salmon to taste of cherries. But no. It tastes BETTER! Nyuuuk nyuk nyuk nyuk!"

"Tell you what. You can't beat cherry salmon fried up and salted, maybe with a dinner roll on the side. Not that I mind 'em raw either. Anything goes when it comes to eating fish! YUM!" 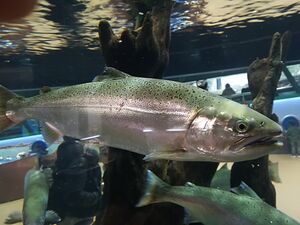 The masu salmon (sometimes called the cherry hybrid salmon), Oncorhynchus masou, can be found in the western areas of the Pacific Ocean, namely Japan and Korea. It has a landlocked sub-species called the Taiwanese salmon, found in Taiwan. It gets the name cherry salmon from the color it goes when it hits maturity, where the stripes on its sides develop a crimson tinge. It feeds mainly on insects, but also feeds on small fish and crustaceans. It is an endangered, harmless fish.