The great white shark (known as the shark prior to Animal Crossing: New Horizons) is a sea fish in the Animal Crossing series that first appeared in Animal Crossing: Wild World. It appears during the evening and at night in the summer, has a finned shadow, and sells for 15,000 Bells.

Blathers will say this upon donation of the shark:

"Shark flesh is often used in processed seafood products, eh wot? As such, you might wonder why it isn't grilled like other fish, am I correct? Well, shark tends to reek of ammonia, you know. And that is NOT good."

"Great white sharks are obviously known first and foremost for their biting. They are masters of the craft! They do lose teeth regularly through biting-related activities, but, luckily, those teeth grow back quickly. In fact, their missing teeth can be regrown in a single day. Just imagine their tooth-fairy-related income!"

The great white shark can be found in the second room once donated.

During a Fishing Tourney, when given a shark, Chip will say the following dialogue.

"You can pound shark into a paste and squeeze it into wrappings for shark dogs! Nyuuuk nyuk nyuk nyuk!" 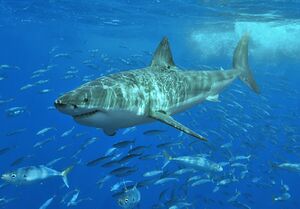