(Redirected from Jingle Comes to Town)

Toy Day is an event in the Animal Crossing series that takes place on December 24.[nb 5] It is based on Christmas and the holiday season and features Jingle, a reindeer who delivers presents. In games prior to Animal Crossing: New Leaf, Toy Day is the sole source of items from the Jingle Series. 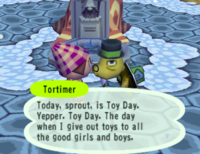 Tortimer speaking to the player on Toy Day in Animal Crossing. 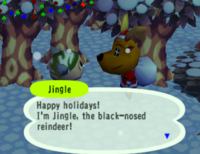 Jingle introducing himself to the player on December 24 in Animal Crossing.

If the player speaks to Jingle again, he explains that he only gives one gift to each person; however, if the player changes their clothing, he mistakes them for another person and asks them another question. This time, Jingle asks the same question he asked before giving the first gift. He then gives a gift when spoken to next. After the player receives their tenth total gift, Jingle realizes what they are doing and will not give out any more gifts. This, paired with the fact that two of the options cannot be chosen,[nb 6] means it is not possible to receive every item in one night with a single player. A total of thirteen items can be obtained from Jingle on December 24: the ten furniture items from the Jingle Series, the Jingle wall, Jingle carpet, and Jingle shirt.

If the player received at least one item from Jingle on December 24 and played when the clock hit midnight, Jingle will send them a letter reading "Happy Holidays!!! Here's your present, straight from Jingle's workshop!" and containing Balloon Fight. 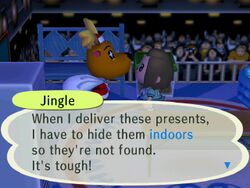 Jingle inside a villager's house in City Folk.

The player can change their accessory, headgear, or hairstyle so that Jingle may mistake them for another character, repeating the process. Unlike in Animal Crossing, changing shirts does not trick Jingle.

Sometimes, Jingle can be found in an empty villager's home. This is the only time in the game that the player may enter villager's homes when they are not inside.

The player meets Jingle in their town in New Leaf.

The player delivering a present to Molly in New Leaf.

In Animal Crossing: New Leaf, from December 1 to 23, each villager in the player's town will give two clues on a desired item for Toy Day. Every villager will mention a certain color in one conversation, while in another conversation, the type of item (carpeting, clothes, electronics, food, furniture, instrument, lamp, toy, umbrella, or wallpaper). These clues are then used to correctly identify and deliver the desired item during Toy Day.

For Toy Day, the player must dress up as Santa, wearing the Santa hat, Santa beard, Santa coat, and Santa pants, all available from Able Sisters. The Santa boots, available from Kicks, is optional. Only one of these articles are sold in Able Sisters and in Kicks from December 1 to 23; however, on Toy Day, the entire outfit can be bought at once.

On December 24, the villagers will stop giving hints, but will be seen anticipating for their presents. By 6 PM, Jingle will appear in town, and, once dressed up as Santa, he will ask the player if they could be his partner in delivering presents. He will then give the player the Santa bag, which contains all of the villagers' requested items. The requested items are such that no two items will have the same color and type. If the bag has not been returned to Jingle, the bag will break the following day.

Giving the item to a villager requires the Santa outfit be worn and the Santa bag be worn. Villagers will refuse to go to sleep until they have been given a present. Their reaction will depend on whether the gift given matches their preferred color and type or not. Giving the wrong present will result in the villager expressing their disappointment to the player. Giving the correct present will cause them to express joy about their gift.

After delivering all the items to the villagers, the player can speak to Jingle to receive a festive wreath. If the player gets all the presents delivered to the correct villagers, they will be mailed Jingle's pic.

The player giving a gift to Sherb on Toy Day in New Horizons.

While initially absent from Animal Crossing: New Horizons, Toy Day was added in the 1.6.0 Free Winter Update.[nb 7] Throughout December, toys are sold at Nook's Cranny and holiday-themed clothing is sold at the Able Sisters.

The setting that Toy Day undergoes is dependent on hemisphere settings, since this event takes place in both winter and summer. On northern hemisphere islands, it will be snowing all day on Toy Day and the background music will be softer and use jingle bells. Villagers will tell the player to stay warm and comment on the freezing temperatures. On southern hemisphere islands, it will be sunny on Toy Day and the music will be more vibrant and use extra percussion. Villagers will remind the player about the heat and to stay in the cool. If the player wears the Santa hat, Santa beard, Santa coat, and Santa pants, villagers will comment on them looking like Santa.

If the player interacts with the Toy Day stockings the day after they are hung up, beginning on December 25 and ending on January 1, they will receive Jingle's photo.

Brewster will also wish the player a happy Toy Day after they drink his coffee at The Roost.

In the Board Game mode in Animal Crossing: amiibo Festival, Jingle appears on December 24 for Toy Day and gives all players 5 Happy Points and 3,000 Bells.