The king salmon (キングサーモン, Kingu sāmon) is the largest Salmonid in Animal Crossing: Wild World and Animal Crossing: City Folk. It sells for 1,800 Bells and is approximately 163 cm (64 inch) long. It appears in September at any time of the day. It can be found at the river mouth (which is where the river and sea meet) in the first half of September, but moves up to the river in the second half of the month.

"Woohoo! I caught a king salmon! All hail the king! For I am the fish king!"

Woohoo! I caught a king salmon! All hail the king! For I am the fish king!August - September: All DaySeptember (1st half)The largest of all the salmons, they're also among the most valuable fish.River mouthHuge160 cm1,800Unknown1,8002.0x1.0 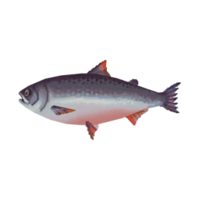 "Whoo hoo! Whoo hoo! I caught a king salmon! All hail the new king! ME!"

"Woohoo! Woohoo! I caught a king salmon! Where are his horses and men?"

Blathers will say this upon the donation:

"The king salmon will swim upstream to spawn, as most people know... What many DON'T know, however, is that it eats nothing while en route! As such, when king salmon begin their journey at the mouth of a river... They're all fatties! Think upon that the next time you eat an entire cake before working out, wot!"

Blathers will say the following upon the donation:

"...Hoo, quite impressive! This one put up quite a fight, I should think? The regal king salmon dwarfs lesser salmon with an overall length of up to 60 inches (130 centimeters), eh wot? Its size makes catching it with a net difficult, so most people rely on a fishing rod to catch the king!"

"King salmon grow to about twice the size of regular salmon, which really helps them embody the name. This size essentially makes them the actual kings of salmon, though they are also called chinook salmon. In some regions, they return to the river in spring or summer and live there until spawning in the fall. In rare cases, king salmons' meat will be white, but these are not as popular since pink is the standard."

Blathers will say the following upon donation:

"The king salmon didn't get its name for nothing. This stately fish can weigh in at up to 130 pounds! It's clear why it's referred to as the king of salmon. I imagine even the mightiest net can catch no more than a few at a time. I must say it's a miracle to me that you didn't get dragged out to sea by this one, wot!"

This fish, also known as Chinook Salmon is very large, often growing to be over 34 kg (75 lbs). They are very beautiful and are known to be very good fighters when fishing. Once in a while they grow to be over 43 kg (95 lbs) and 1.8 m (6 ft), but the majority are 60–90 cm (2–3 ft) and 14 kg to 18 kg (30 to 40 lbs). They are native to the Pacific coast from Alaska to California, and Argentina to Chile. They are also found in great numbers in Israel, the Great Lakes, along with the Rocky Mountains, notably Lake Michigan where the record is 20 kg (45 lbs) from Illinois.

This article may require cleanup to meet Nookipedia's quality standards.
Please help improve this article if you can; the talk page may contain suggestions.
Retrieved from "https://nookipedia.com/w/index.php?title=King_Salmon&oldid=329467"
Categories:
Hidden categories: