The Neon Tetra (ネオンテトラ, neon tetora) is a tiny fish introduced in Animal Crossing: City Folk. It is found in the river between the months of April and November between 9 AM and 4 PM. It is the smallest fish in the Animal Crossing series.

"I caught a neon tetra! I'd better put on some sunglasses!"

"I caught a neon tetra! Wasn't hard to track."

Upon the player's donating the fish to the museum, Blathers will say the following

"That metallic blue body! Hoo, that crimson tail! That pristine white belly! ...Now, THIS is what I call a tropical fish! No wonder this fish has the word "neon" in its name, eh wot? One of these should liven up the museum nicely!"

It can be found in the small tank to the left with the Goldfish and Popeyed Goldfish in City Folk.

"Neon tetras get their name from the beautiful blue metallic line on their bodies. Although they're shy, gentle fish, surprisingly they're related to the piranha, though very distantly. They have very sharp and narrow teeth, an odd contrast to their beauty. They are delicate fish who tend to be very sensitive to the cleanliness and temperature of water."

"Hoo! Wonderful! The neon tetra is truly a marvel of the tropical-fish world. Just look at how tiny it is! And how very filled with...neon! I imagine its environment must be just as flashy as it is for it to have developed such colors. I wonder how flashy I might be, had I been raised somewhere even half as vibrant?"

Once donated to the museum, the Neon Tetra can be found in the small fish tank in the first exhibit room with the Betta and Rainbowfish.

During a Fishing Tourney, when given a Neon Tetra, Chip will say the following dialogue.

"Man, those neon tetras, I could eat these while juggling chainsaws. It's a bit risky for amateurs though. Come to think of it, I have no idea why I'd want to juggle chainsaws while trying to eat... Oh well, down the hatch for you!" 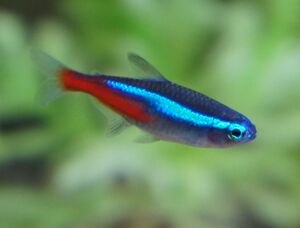 Neon tetras are native to backwater and clear water streams in southeastern Colombia, eastern Peru, and western Brazil, living in the Amazon river. Neon tetras are a popular aquarium fish, mainly because of its appealing coloration. It has a light-blue back that meets a silver-white abdomen, with a red and blue stripe in between them. It is however, transparent. During the night, when the neon tetra is inactive, it loses its red and blue stripe, which turns silver. There is a slight difference between male and female neon tetras. The males have a straight red-blue stripe while females have a slightly crooked stripe, because of their rounder body shape. Neon tetras can be afflicted by "Neon Tetra Disease" (or NTD), which is incurable. It involves the loss of coloration in the bodies as well as restlessness.