From Nookipedia, the Animal Crossing wiki
(Redirected from Butterflyfish)
Jump to navigation Jump to search 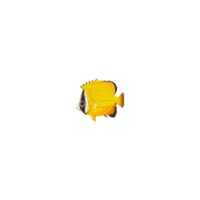 I caught a butterfly fish! I didn't even have to use a net!April - September: All DayThese are said to use their bright colors to communicate with their peers.SeaSmallAbout 7.2 inches (18 cm)1,0001,0001.0x1.0