The Golden Trout is a freshwater fish in Animal Crossing: New Horizons found at river clifftops. Selling for

15,000 Bells, it is tied with the Coelacanth, Dorado, Great White Shark, Stringfish, and Barreleye as the most valuable fish in the Animal Crossing series.

"I caught a golden trout! But the real treasure? Friendship."

As with all bugs and fish in the Animal Crossing series, the Golden Trout can be donated to the museum by talking to Blathers, the curator, who will follow the donation with some information.

"The golden trout is a beautifully colored fish that can only live in very clean waters. They are difficult to come across since they are found only in high mountain streams. As a side note, I find it much easier to appreciate fish that aren't such prima donnas about everything."

The Golden Trout can be found in the top waterfall tank in the freshwater fish room with the Cherry Salmon. 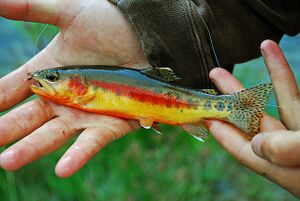