The char[nb 1] (known as the large char prior to Wild World and in Wild World's catch quote) is a freshwater fish in the Animal Crossing series that appears in all games.

"I caught a large char! I wonder how it tastes charbroiled..."

"I caught a char! How bizarre!"

Blathers will say the following if the player donates the large char:

"Oh! What a large and CHAR-ming fish. That was dismal, wasn't it? Mum warned me to avoid comedy. Regardless of my shabby comedic failings, this fish will have a safe and comfortable home here."

The large char appears in the first left tank of the aquarium.

Upon donating it to the museum, Blathers will say the following:

"Hoo! Indeed, WOO hoo! A char! There are many ways to prepare char, or so I've heard from gourmands. Sadly, it is NOT deemed acceptable to char them, rendering all puns moot. I suspect any and all puns might've been substandard, so perhaps that's best."

Upon donating it to the museum, Blathers will say the following dialogue:

"Char are certainly not named for the method people use to cook them. That would be rather daft... Since they aren't the best of swimmers, they often take refuge from rushing waters in rock crevices... When feeding, they merely stick their faces into the rushing water and let food fly in, wot wot? No one's sure if it's lazy or brilliant...but it certainly is quite hard to dislike!"

The char appears in the middle, left tank of the aquarium.

Upon donation to the museum, the information board in front of the tank that houses the Char says the following:

"Char are related to salmon and live in rivers upstream, not generally migrating to the ocean. They prefer colder water and dwell in secluded, clear rivers deep in mountain ranges. Since they tend to hid mostly in between rocks in these cold areas, they can be rather difficult to spot."

"The char is one of the bigger fish around and, in the world of fish, that's quite an accomplishment! They are territorial predators, and therefore must constantly defend their 'turf' from others. So when you see a large char like this one, it is likely a skilled fighter and veteran of many battles. My feathers! I hope it never has cause to go to battle with me!"

The char can be found in the righthand waterfall tank in the freshwater fish room.

During a Fishing Tourney, when given a char, Chip will say the following dialogue.

"One thing I learned cooking with char is that fish and chocolate do NOT mix. Nyuuuk nyuk nyuk nyuk!"

"I really can't think of anything that's better than char fried up perfectly. And the bigger the better, right? Still, eating 'em raw doesn't turn me off to them one bit! YUM!" 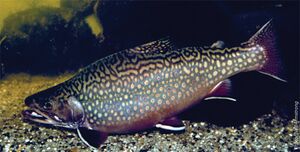 The Salvelinus alpinus or arctic char is closely related to the salmon and trout, sharing characteristics from both. It is native to arctic, sub-Arctic and alpine lakes. No other freshwater fish can be found as far north as this fish. It is a rare fish in Britain, only found in glacial lakes but can be the only fish to be found in lakes around the Canada Arctic. In Scandinavia, it is extremely common and fished extensively. The color of the fish varies between pale pink and bright red. It is an alternative fishing solution to Rainbow Trout for a farming fish because it uses very little resources. Char feed mainly on insects, but can feed on fish and small crustaceans.