(Redirected from Sea Butterfly)
Not to be confused with the butterfly fish.

"I caught a sea butterfly! I wonder if it used to be a sea caterpillar?"

In Animal Crossing: New Horizons, the sea butterfly appears as a default item in Wade's house.

"I caught a sea butterfly! Try not to confuse it for a sea moth!"

The sea butterfly can be donated to the museum by talking to Blathers. Below is what he says during the donation:

"The sea butterfly is in the same family as snails, as you may or may not know. You might think it's strange to have a snail without a shell, eh wot? Indeed, well, slugs are also snails without shells! I must admit, being lumped in with slugs probably angers the sea butterfly."

The sea butterfly is placed in the large sea tank in the aquatic display in the back room.

It occupies a large glass tube in the lower-right corner of the fish exhibition, with other small sea fish.

Upon donation, the information board outside the tank that houses the sea butterfly says:

"Such mystery! Such grace! Did you know that the sea butterfly's scientific name is Thecosomata? A very rough translation of that is "shell body." Indeed, this illustrious creature is related to snails! However, it reminds me much more of an elegant feathered friend, the way it flies through the water. With such grace in flying, one shouldn't wonder if it's related to the owl, hoo hoo!"

When the sea butterfly is donated, six of them will appear in the northern room of the fish exhibit, in a tall tubular tank with a light blue crystal. It is one of the few fish which the museum will have multiple of upon its donation.

During a Fishing Tourney, when given a sea butterfly, Chip will say the following dialogue.

"With sea butterfly, it's all about the texture! Bouncy, squishy, and melty at once! Nyuuuk nyuk nyuk nyuk!"

"When it comes to sea butterflies, you don't need a net or nothing. Nope, just a pole! Nyuk nyuk nyuk! ...OK, down it goes!" 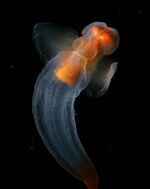