The Zebra Turkeyfish (ミノカサゴ, Minokasago) is a fish in the Animal Crossing series that first appears in Animal Crossing: Wild World. It can be found in the sea during the months of April through to November, at anytime of the day. It has a medium shadow, the same size as a Barred Knifejaw.

"I caught a zebra turkeyfish! No gobbling those spines!"

"I caught a zebra turkeyfish! What are you? Make up your mind!"

"I caught a zebra turkeyfish! Land, air, water—make up your mind!"

"I won't tell you it's utterly impossible to eat a zebra turkeyfish, but... I really wouldn't recommend it, to be honest. If you insist, though, you know my philosophy: batter, batter, and more batter!"

The Zebra Turkeyfish can be found in the saltwater aquarium, swimming along the sand.

"As its flashy coloration suggests, the zebra turkeyfish is poisonous. In other words, it's trying to tell you, "Touch me and you're sure to be right sorry, my fine friend!" Its slow, deliberate swimming style also suggests that this is one fish not to mess with!"

"Zebra turkeyfish have long, beautiful fins that flow like gowns as they swim through the sea. However, these aquatic beauties pack a punch, as their fins are filled with poisonous spikes. Aside from protection against predators, this poison comes in handy for turf wars between males. The losing male succumbs to the poison in a matter of days, making these battles life and death."

"The sheer brilliance and diversity in the aquatic underworld never ceases to amaze me. This zebra turkeyfish is as stunning to gaze upon as it is deadly. Those spines that are part of its defining physique are chock-full of venom! Fortunately, zebra turkeyfish are not susceptible to another's venom. Though solitary, I imagine they give one another a mean fin bump when passing each other by."

Once donated, the Zebra Turkeyfish can be seen in the coast tank alongside the Sea Bass and the Ray.

During a Fishing Tourney, when given a Zebra Turkeyfish, Chip will say the following dialogue.

"If you want a treat, deep fry a zebra turkeyfish! You never tried that? Frying works great for most fish! As for this guy, well, eating it raw doesn't bother me one bit! YUM!" 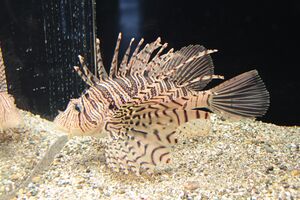 The zebra turkeyfish, more commonly known as a luna lionfish, is found in tropical water in the western Pacific Ocean, especially around Japan and Mauritius. They have 13 venomous spines on their bodies (also called fin rays) that are used both as a defence mechanism and to hunt prey. In humans the venom can cause symptoms such as severe pain, nausea, difficulty breathing, and convulsions. In rare cases the venom can be fatal, usually only in people who are very young, elderly, or have a weakened immune system. They have few predators, likely due to their venomous fin rays, however there have been some sightings of predators like Moray Eels and sharks hunting them.