(Redirected from Butterfly Fish)
Not to be confused with the sea butterfly.

Upon donating the butterfly fish to the museum, Blathers will say;

Upon donation to the museum, the information board in front of the tank that houses the butterfly fish says:

During a Fishing Tourney, when given a butterfly fish, Chip will say the following dialogue.

"Check it out. I like my butterflyfish seared with a macadamia-nut butter. Nyuuuk nyuk nyuk nyuk!"

"Now with a butterfly fish, you want to salt and then grill that guy right up. I'm not that picky, of course, so I'm just gonna scarf it raw! YUM!" 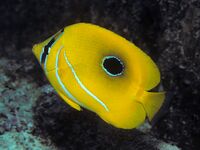