From Nookipedia, the Animal Crossing wiki
(Redirected from Seahorse)
Jump to navigation Jump to search

The Sea Horse[nb 1] (known as the Seahorse prior to City Folk) is a saltwater fish in the Animal Crossing series introduced in Doubutsu no Mori e+.

"I caught a seahorse! Giddy up! YEE HAW!" 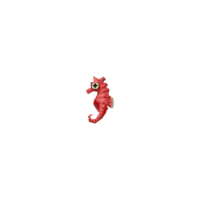 Upon donating to the museum, Blathers will say the following:

"I can't think of a soul who claims to have eaten a meal of seahorse... However, it has been used for centuries as an herbal supplement, that I know. A supplement for what, I haven't the foggiest."

After being accepted by Blathers, the Seahorse can be found bobbing around in the sea tank of the aquarium.

"This creature is covered in hard scales that suggest a relation to crabs or shrimp, but it's a proper fish. That said, it's a dreadful swimmer and can't usually move against powerful currents, eh wot? In such environments, the sea horse will cling to kelp and stay there until the waters calm a bit... Seeing those little fellows holding on for dear life makes me want to cheer them on! Cling, sea horse!"

It can be found in the bottom-right tank with the other small, sea fish like the Clownfish and Sea Butterfly.

Upon donation, the information board outside the tank that houses the Seahorse says:

"Sea horses don't look like fish, but they still share a lost of distinct connections. They use their small dorsal fins and tail fins to swim, but in actuality they're pretty bad swimmers. They wrap their tail fins around seaweed or coral so they won't float away with the current. Once attached, they feed on plankton and small shrimp that float by. The female deposits eggs in the male's pouch, putting the burden of child care on the male."

"A, a favorite of mine, to be sure! The sea horse is such a very unique creature and is indeed a fish! Though, as far as fish go, sea horses are not great swimmers. The sea horse, you see, has but a wee fin on its back, which propels it through water rather poorly. Thus these fish are often found using their prehensile tails to hold tight in amongst the sea grass. And here's one final fact for you... Sea horses have no stomach and so must constantly feed to stay alive! Indeed, the life of a land horse sounds far easier than that of the hardworking horse of the sea."

The males carry the eggs in a brood poach located under the tail. The females lay their eggs into the pouch, and the male carries them around until they hatch. It is a harmless fish, popular in private and public aquariums.