The Horse Mackerel (アジ, Aji), one of the cheapest fish in the Animal Crossing series, is a common fish introduced in Doubutsu no Mori e+ that can be found in the sea. It can be caught at any given time or month. When this fish is given to Wendell in City Folk, the player is rewarded with a Horizontal Track pattern. In Animal Crossing: New Leaf it is used in the Fish Salad recipe during the Harvest Festival. 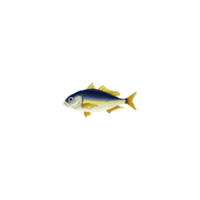 "I caught a horse mackerel! But it sounds fine to me!"

Wendel gives the player a Horizontal Track Pattern if given a Horse Mackerel.

Blathers will say this when handed the fish:

"How do you like to eat your fried horse mackerel? With tartar sauce? Vinegar? ...Ah! Cocktail sauce?! Hoo, I see. Fascinating."

Blathers will say this when handed the fish:

"Horse mackerel are not at all related to horses... Rather obvious, I should think... It's quite a strange name, given how many fish are related to this one, like yellowtail and amberjack."

The plaque by the tank in which the fish is housed says the following:

"With their appealing flavor, horse mackerel have long been a cheap and common food source. However, in certain regions, they have actually been branded as something of a luxury dish. They have tough scales on both sides of their bodies that must be removed before preparing. Though small, they are formidable carnivores. Since they go after bait, they are popular with fishers."

When donating the Horse Mackerel to the museum, Blathers says this:

"Supposedly the horse mackerel derives its name from a-false-myth about its strengh as a swimmer. The gist of it is that these fish are so powerful underwater that smaller fish can ride them as steeds! It's absurd, of course. Where would these alleged fish jockeys attach a saddle, much less horseshoes? One does wish that people would construct their legends with a BIT more scientific plausibility!"

Chip will say this when given a Horse Mackerel:

"Horse mackerel, man, those guys are tasty with a capital MMMM. So I'm just gonna scarf this one down. Totally raw, of course!"

The Japanese jack mackerel has a depth range of 0 – 275 m, but usually 50 – 275 m. It is tropical. It is an important fish in the fishing trade and can be found in the northwest Pacific Ocean. It is vulnerable.