The olive flounder is a sea fish in the Animal Crossing series introduced in Doubutsu no Mori e+. It is very similar in appearance to the dab, another saltwater fish, and is even confused with it by the player in its catch quotes in Wild World and New Leaf.

In Animal Crossing: New Leaf, the olive flounder is used for the Soup de Poisson and Olive Flounder Meunière recipes for the Harvest Festival.

"I caught a dab... Huh? Just kidding! It's an olive flounder! Make up your mind, fishy!"

In New Horizons, an Olive Flounder can be used as an ingredient for Franklin to cook the Fish Meunière dish on Turkey Day.

"I caught an olive flounder! That's not the pits!"

Olive flounder is used as a cooking ingredient in the cooking recipes for the following items:

As with all bugs and fish in the Animal Crossing series, the olive flounder can be donated to the museum by talking to Blathers. During a donation, Blathers will tell the player a bit about the donation. Below is what he has to say.

Blathers has this to say about the olive flounder in Animal Crossing: Wild World:

"For some time, I was convinced that olive flounder tasted of olives. It turned out that it was a rather elaborate joke played upon me... I should have known there are no such things as flounder olives, either!"

Upon donating the olive flounder in Animal Crossing: City Folk, Blathers will say the following dialogue:

"Olive flounders are masters of self-transformation... who, I'm told, can grow to almost 40 inches (a meter) long. That's like some sort of underwater bath mat! It's a good thing you caught this one while it's still young!"

It can be found in the tank at the back of the aquarium, hiding underneath the sand, with other sea fish.

The information board in front of the tank that holds the olive flounder says the following:

"Olive flounders are rather flexible whitefish that have both eyes on the left side of their body. They can reach three feet in length and are commonly mistaken for dabs, a close relative. When young, they have an eye on each side, but as they age, their right eye migrates to their left side. These carnivorous fish can change color to camouflage themselves on the seabed as they wait for prey."

"Did you know that the olive flounder is the same shape as other fish when it hatches? But as it grows, it gets both wider and flatter and can reach some three feet long. These flat fish spend much of their lives buried under the sandy ocean floor, waiting for prey to happen by. Imagine the surprise for said prey when they strike. It would be as if your kitchen floor were to bite you."

During a Fishing Tourney, when given an olive flounder, Chip will say the following dialogue.

"I like to go with a spicy, blackened filet with olive flounder. So should you. Nyuuuk nyuk nyuk nyuk!"

"Olive flounder—BOY, are they tasty! In fact, I'm just gonna go ahead and scarf this guy down right this very second! I can hardly wait! YUM!" 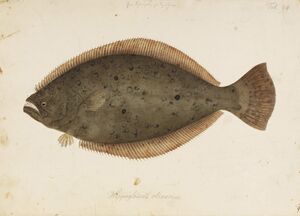 The olive flounder is an Asian flatfish that occupies a large area of Asian flatfish taken for commercial reasons. Hirame (平目 / ヒラメ) as it is called in Japan or (광어 Korea Flatfish) as it is known in Korea is widely raised in aquaculture in China, Korea, and Japan as a food fish. It is a very large type of flatfish that can be well over a meter in length which is far larger than most other species that typically never reach more than 30 cm.