Harriet is a pink poodle who runs Shampoodle, a barber shop. Harriet wears a blue, red, and white striped apron resembling the French flag (possibly because the poodle is the national dog of France). It can also represent an old fashioned barber pole, which features the same blue, red, and white stripes. She changes the hairstyle of the player depending on their answers to a series of questions. It usually costs 3,000 Bells to use Harriet's services. She first appears in Animal Crossing: Wild World, working in a store in Nookington's, and again appears in Animal Crossing: City Folk and Animal Crossing: New Leaf, with her own stores in the city and Main Street respectively. Her name is a pun on the word "hair," and her Japanese name is a pun on "cut," both in reference to her profession.

In Animal Crossing: Wild World, Harriet is the proprietor of Shampoodle, which is located within Nookington's. She will offer the player a haircut, which is styled based on the answers of a series of questions - the answers usually relate to a stereotypical hairstyle by a type of group or genre. The player can only get one haircut per day. Harriet will be at the Roost Café, 11:00 PM – 12:00 AM, Mon - Fri, but the player must have Nookington's in their town first.

Harriet will be added to Animal Crossing: New Horizons as part of the update scheduled for November 5, 2021. In addition, Harriet's Poster can be obtained from Nook Shopping after attempting to invite her to Photopia via her amiibo.

Harriet appears as a spectator in Super Smash Bros. Brawl, in the Smashville stage. 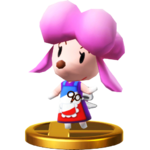 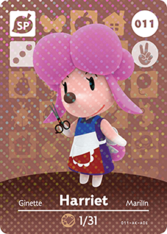