From Nookipedia, the Animal Crossing wiki
(Redirected from Ables)
Jump to navigation Jump to search

This article is about the shop. For the three characters collectively known as the Able sisters, see Mabel, Sable, and Label.

The Able Sisters is a clothing shop and one of the main stores in the Animal Crossing series. It is owned and run by Sable and Mabel, and in Animal Crossing: New Leaf, the third sister, Label, works in an attachment to the shop that sells accessories and headwear. The original store was owned and ran by the sisters' parents until their deaths when the business was handed over to Sable. Sable was left to look after her younger sister, Mabel. Mabel interacts with customers, while Sable creates patterns.

The main products that the player can purchase from Able Sisters are clothes, including tops, bottoms, headwear, accessories, and umbrellas. In addition, the player is able to try on the clothing before it is bought, and prior to New Horizons, designs can be created. 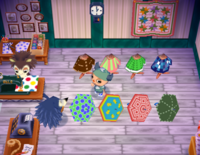 The Able Sisters in Animal Crossing.

In Animal Crossing and Doubutsu no Mori e+, the Able Sisters is located in one of the F acres and is open from 8 AM to 11 PM. Inside the shop, unlike in subsequent games, no clothing items are sold. Instead, eight pre-made designs (four displayed on shirts and four displayed on umbrellas) are displayed, which can be taken, replaced, or traded for one of the player's designs. Additionally, the player can speak to Mabel to create custom designs for a fee of 350 Bells. The custom designs can optionally be edited with a Game Boy Advance if a Nintendo GameCube Game Boy Advance Cable is connected. Mabel also allows the player to scan design e-Reader cards, which give the player a unique design.

The Able Sisters in Wild World.

In Animal Crossing: Wild World, the Able Sisters is located next to Tom Nook's store and is open from 8 AM to 11 PM. Like in Animal Crossing, eight designs are available and can be taken, replaced, or traded for one of the player's designs. Additionally, clothing items are now sold, with one umbrella, three shirts, one piece of headwear, and one accessory lining the back wall. Talking to Mabel allows the player to create designs for 350 Bells or sell clothing items. Unlike in Animal Crossing, designs cannot be stored.

The Able Sisters in Animal Crossing: City Folk is identical to Wild World in most aspects, including its appearance, selection, and opening hours; however, it is now no longer located next to Tom Nook's store and can appear anywhere in town. Because designs can now be created via the menu, Mabel no longer allows the player to create them; instead, she allows the player to create Pro designs, which have more customization options, for 350 Bells. Design storage also returns from Animal Crossing, and clothing can no longer be sold at the shop.

In Animal Crossing: New Leaf, the Able Sisters appears on Main Street, to the right of the Nooklings' store. It is open from 10 AM to 9 PM[nb 2] and now features an additional room run by Labelle for accessories, which can be accessed either from the main room or from outside. The main room retains the eight designs from previous games and features a selection of two to three tops (one may occasionally be replaced by a dress) and two bottoms. Labelle's room features three pieces of headwear, three accessories, and one umbrella. Like in City Folk, Mabel allows the player to create pro designs and save designs, although pro designs now cost 500 Bells. If the player befriends Sable, a sewing machine will eventually appear beside her. This machine allows the player to convert their designs into QR codes, which can be read by the same machine.

If a male player tries out a skirt or a dress, Mabel will act surprised. This behavior is removed in New Horizons.

The Able Sisters in New Horizons.

In Animal Crossing: New Horizons, the Able Sisters is built after the museum and Nook's Cranny are built, and after the player spends at least 5,000 Bells at Mabel's shop when she visits the island, at which point she will recognize she has built up a customer base and get the idea of opening a shop, giving the shop kit to the Resident Representative. The shop is open from 9 AM to 9 PM and sells one each of a dress-up item, top, bottoms, shoes, an accessory, and a headwear item It also offers eight pre-made designs and two complete outfits. New to New Horizons, the Able Sisters has a fitting room, where the player can try on and buy clothing, including clothing that is not currently in the store, and the Custom Design Portal, where players with a Nintendo Switch Online membership can upload and download custom designs. The fitting room cannot be entered if the player is under the effect of a wand or wearing a wet suit.

Once the Able Sisters is built, Label will start occasionally appearing on the player's island to conduct a Fashion Check.

In Animal Crossing: Pocket Camp, Mabel, Sable, and Label run a pop-up clothing store in the Market Place known as the Able Sisters To Go.

The Able Sisters in Gekijōban Doubutsu no Mori.

The Able Sisters makes a minor appearance in 🎬 Gekijōban Doubutsu no Mori. Shortly after Ai moves into Animal Village, she makes a delivery to the shop. While she is there, she admires the clothing and meets Sally, who shows her design creations to Mabel and Sable.

The Able Sisters appear as a trophy in Super Smash Bros. for Nintendo 3DS and Wii U.