(Redirected from Bug Off)

The Bug-Off is a bug catching competition in the Animal Crossing series that is held during the summer, in the months of June, July, August, and September. In New Horizons, islands set in the southern hemisphere have the Bug-Off during the months of November, December, January, and February. 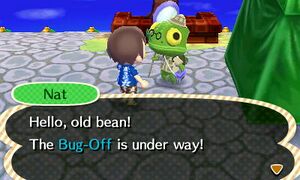 Nat introducing the player to the Bug-Off in New Leaf

During the day of the competition, each time a player gives a bug that achieves a new high score, they receive a gift from Nat (Tortimer in Wild World). In Animal Crossing: New Leaf, players will receive an item from the Insect Set if they hand over a record-breaking bug worth at least 80 points. At the end of the competition, the winner of the Bug-Off receives a mention on the bulletin board as well as a bronze, silver, or gold trophy through the mail for reaching third, second, and first place respectively. There are no trophies for second place in Wild World and City Folk.

During the Bug-Off, villagers are seen trying to catch bugs with Nets (although they cannot actually catch them), and they will only talk about the event, meaning no items can be received or given, and no favors or Reactions can be received. Villagers who are in their houses will converse as usual, except in some cases they may remind the player about the Bug-Off when talked to, and then mention why they're not participating themselves.

After obtaining 10 or more points, players can exchange their points for a "bug relic." The 13 possible items are distributed in a random order, after which the player will start receiving duplicate items. In addition, if the player obtains 100, 200, or 300 points over the course of the day, Flick will mail them a corresponding trophy (bronze, silver, or gold). This total is cumulative; points that have been traded in for relics still contribute to the total.