Difference between revisions of "Tank"

Tank is a jock, rhino villager who appears in all games in the Animal Crossing series, and is the only rhino villager to do so. His name may come from a type of tank called a "Rhino Tank," which also references his species. His name may also be a reference to a tank-top shirt, which is commonly used when exercising, matching his jock personality.

Tank is a pale blue rhino with three white horns along his head, as well as a green leaf on the back of his head, similar to Tangy. He also has white hooves and dark blue inside his ears. His initial shirt is the No. 1 Shirt which is red with a light blue number one, and goes with his jock personality.

Tank has a jock personality, which means he will have a keen interest in sport and fitness, making him appear competitive and in some cases rude when talking to other villagers and the player, usually criticizing their fitness or activeness. However, despite these obsessions he appears hospitable towards the player. He will appear slow-witted and absent-minded when in deep, meaningful discussions which may leave him confused and upset when talking to other villagers. He will get along well with peppy and uchi villagers, the former sharing the hyper-active nature of jocks and the latter sharing a love of sports. He will also usually get along with normal villagers, who are friendly towards all personalities, and he will also get along with smug villagers for their similar sense of humor. He will, however, get confused by the choice of lifestyle followed by lazy villagers, who are an opposite to the jock personality. He may also offend and upset snooty and cranky villagers, by annoying them with his hyper-active nature and questioning their physical fitness and age. 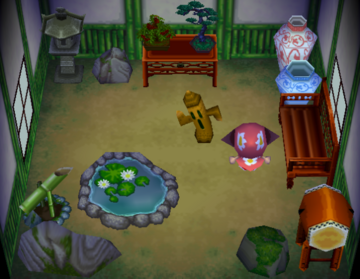